Saturday marked 22 years since the infamous Old Salisbury Road shooting.It was on July 17, 1988, that Michael Hayes opened fire along the Winston-Salem road, killing four people and injuring five others.R.B. Nicholson, the father of one of the victims, 24-year-old Tom Nicholson, held a candlelight vigil at the scene of the shooting Saturday at 9 p.m."It's hard to come by this corner, because you see this corner and you know what happened on it," said Linda Cantrell, whose 16-year-old daughter, Crystal, was killed in the shooting."She was late coming home that night," she said.Hayes is scheduled for release after more than 20 years at Dorothea Dix Mental Hospital in Raleigh. He was found guilty by reason of insanity.R.B. Nicholson said Hayes' release won't affect the message they hope to send at the vigil."We don't ever mention him, the shooter, because it's not about him. It's about the family, the victims and their friends," he said.While Hayes is ordered to stay out of Forsyth County, the victims' family members said they will never forget what happened there."The mistake was made back then, and now we're all suffering from it," Cantrell said. "He's getting out, and make him mad he'll probably do it again."Under the terms of Hayes' release, he must attend Alcoholics Anonymous meetings twice a week and meet with a doctor monthly.
GOD BLESS THESE FAMILIES FOR THE PEOPLE THEY LOST ON THAT DREADFUL NIGHT ON JULY 17,1988.
Posted by CLOSEZZZZZZZZZ at 11:07 AM No comments: Links to this post 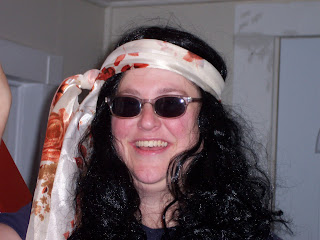 This is my hippie cousin or should I say gypsy cousin. HAHAHAHAHAHAHA!!!!!! Can you guess who this is? To bad it is not Halloween because then I could say Trick or Treat!!!
Posted by CLOSEZZZZZZZZZ at 5:25 AM No comments: Links to this post

RALEIGH -- The family of North Carolina coaching great Dean Smith says the 79-year-old Hall of Famer is dealing with memory loss.
The family sent a letter to former players and coaches Saturday, providing details about Smith's health after generally declining to comment for privacy reasons.Smith's condition was described as a "progressive neurocognitive disorder that affects his memory."Smith retired in 1997 after 36 seasons in Chapel Hill as the winningest coach in Division I men's basketball with 879 victories, a mark passed a decade later by Bob Knight at Texas Tech.Smith won 13 Atlantic Coast Conference tournaments, reached 11 Final Fours and won the NCAA championship in 1982 and 1993.
Posted by CLOSEZZZZZZZZZ at 5:18 AM No comments: Links to this post